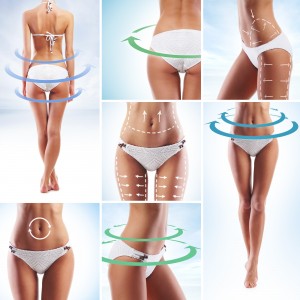 We’re all aware of Liposuction, it’s probably the most well-known of cosmetic surgical procedures and has been around since 1974.

There is traditional Liposuction, Smart Lipo and Vaser Lipo, the latter two, the most advanced forms, are considered minimally invasive and were once referred to as the ‘lunchtime lipo’!  Smart Lipo uses laser and Vaser Lipo uses ultrasound technology to break down fat so that it can then be easily suctioned out of the body.   All forms of Liposuction are not intended to drastically reduce body fat, but to help with areas that are stubborn to diet or exercise attempts.  Popularity for this procedure is growing all the time, due the results that can be achieved, short recovery time and very little scarring.

Not only does Lipo remove the bulk of unwanted fat from areas of the body such as abdomen, flanks (affectionately known as ‘love handles’), thighs, back, chin/neck, arms, axilla (underarms) etc, it is also used to sculpt and add definition.  Known as Hi-Def or 4D Vaser, six-pack abs can be a reality for those who only ever dreamt of it, in a matter of hours, for men and for women alike.  It is important to note that not everyone is suitable for 4D Vaser, and perhaps an initial ‘Standard-Def’ procedure may be carried out first, followed by a second procedure 6 months later potentially.  There is also Mid-Def for those who want a little contouring rather than just de-bulking.  Again, it’s all about the body shape that one is starting out with and best to have realistic expectations.

What some people may not know, even though this too is growing in popularity as a natural alternative to silicone implants, is that fat can be ‘harvested’ from certain parts of the body using liposuction and then transferred to another area where volume is required, such as breasts, buttocks, and even cheeks!  This can be a great way to achieve two results from just one surgery.  There is some speculation that the ultrasonic frequency destroys some fat cells but this is largely still at the speculation stage with little to no evidence to prove this.  However if a patient is concerned there is the option of using traditional Liposuction to harvest the fat, as an option.  Some (lucky) people may not have any areas to be used as a fat donor, so in this case fat from the knees can be harvested and this is considered to be the best fat for transferring.  This procedure is simply known as ‘Fat Transfer’, and some great natural looking results have been and continue to be achieved.

One of the main questions patients ask is: ‘how long does it last?’ and the answer is that the transferred fat behaves in the same way as fat in any other part of the body and does not break down unless the person loses weight, through exercise, dieting, stress or illness.  If the fat is lost then a repeat procedure can be carried out in the future.  Some people opt for fat transfer to the cheeks instead of dermal fillers, and there are various reasons for this: Many doctors say that one’s own body fat provides the most natural, voluminous result and is longer lasting. Injectable fillers do not always provide the most natural results and can end up being an expensive option as they need to be repeated every 4-6 months on average.

However, fillers are a great option if you do not want to have surgery, with the associated risks and downtime.  There is also potential the fat will not ‘take’ and there is the risk of asymmetry.  So this is a decision best discussed with your doctor so you can weigh up the options.

A potential after-effect of Liposuction is loose skin, particularly around the abdomen, arms and neck.  This is found more with patients over a certain age, as skin elasticity tends to reduce as time goes by, and/or after childbirth where loose skin around the tummy is not too uncommon.  This is where mini-Abdominoplasty comes in or ‘mini tummy tuck’ and this is a straightforward procedure performed in a day clinic under local anaesthetic or sedation.  It is the cutting away of excess skin creating a tightening effect and it is the only way to deal with loose skin.  For larger amounts of loose skin a full abdominoplasty could be considered but this is a procedure performed under general anaesthetic in a hospital and requires an overnight stay.  For the arms there is a mini arm lift (mini-Brachioplasty) and for neck/chin: mini neck/chin lift or threadlifting (a minimally invasive treatment to treat sagging of the skin)

Considering any of these options?  Then book in and see one of our Specialists to discover which is the right treatment for you.